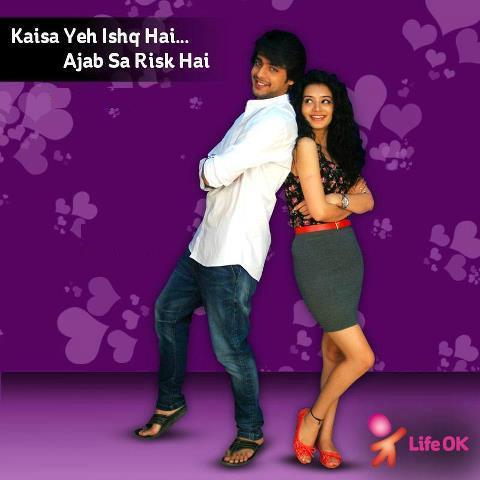 Kaisa Yeh Ishq Hai Ajab Sa Risk HaiWatch Online (English: What Kind of Love is This… It’s a Strange Risk) is an Indian soap opera that airs on Life OK. Gaurav S Bajaj and Sukirti Kandpal are in lead roles. Season 1 aired from April 22, 2013 to October 04, 2013 with Season 2 airing from November 11, 2013.

The show is a love story serial of a Singaporean modern girl, Simran, and a typical Haryanvi boy, Rajveer and her escapade to settle in and win over the patriarchal Haryanvi family, who has different beliefs and values from her. In the first couple of episodes, it is shown how each family is like.

When Simran goes to India to attend her friend’s wedding, she meets Rajveer for the first time. Like all love stories, they hate each other. When Simran goes to the airport to return to Singapore she meets Rajveer. She is totally amused to see him there. They are on the same flight sitting next to each other. Then it is revealed that Rajveer has to share Simran’s cabin in her office. Another day they go to a factory together and, by mistake, Simran picks up Rajveer’s phone. His family is shocked to hear this and thinks he is having an affair with her.
Rajveer’s family decide to get him married to a classic Haryanvi girl. They send him pictures of the top five; they picked and all the people in his office including Simmi. After that, Jas tells them each to make a slideshow to impress some people so they will sponsor their product. Simmi can’t think of any ideas so she reads Rajveer’s presentation and copies it. The sponsors are impressed, but Simran feels guilty and apologises to Rajveer. That is where their friendship begins.

A success party is thrown for Simmi as she impressed the sponsors. At the party Jimmy challenges Rajveer that he can’t finish a bottle of alcohol before him. Jimmy finishes it before him but instantly faints while Rajveer still stands strong. The next day Simran and Rajveer go sightseeing. Simran tells Rajveer that she loves him. But he breaks her heart by telling that he doesn’t love. He lies about that. Rajveer leaves that day Singapore and goes back to India to his family.

Simran is tormented. She believes that Rajveer loves her and also goes to India with her father. She goes to her friend’s house and learns that Rajveer is going to get married. But his fiancee has a affair with someone else. Simran helps her in eloping with her lover. Rajveer’s uncle Shyam Sundar gets angry for the same. When Simran meets Rajveer he gets suprised. His friend Jaggi says to him that he must not lie anymore and tell her that he loves her. But he denies.

When Simran hears that Shyam is looking for a bride she changes her looks to become impressed with Rajveers family. Even her father changes his looks as well. She learns the Haryanvi language, the househol chores and cooking. When Rajveer’s family comes to see her, they become impressed with her. Rajveer;s father who knows who Simran really is helps her in getting married to Rajveer. Even Jaggi comes to know about this. When their marriage is coming Rajveer has a weird feeling about his fiancee. But they get still married. When Rajveer sees her face he gets shocked and angry. He wants her to leave the house.

Three months pass and Rajveer gets in depression by blaming himself for Simran’s death, but at the same time he feels like she is around him but he at the same time is unable to see her. Simran is seen by Lohari in the form of a Ghost. Lohari hits Rajveer with an axe so he loses his memory. Lohari later comes to know that Rajveer is her son and is feeling bad about her injuring her own son. The family gets to know that Simran is alive so they take her home.