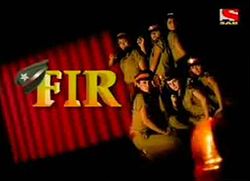 F.I.R. Watch Online is an Indian television sitcom first shown on July 31, 2006, on SAB TV. The show is produced by Edit II Productions and is being broadcast Monday to Friday nights. The sitcom was nominated for the Best Sitcom category at the Indian Telly Awards in 2009. The sitcom is set in a police station.
On March 16, 2013, the show took a 20 year leap from 2013 to 2033 but from 8 July 2013 the setting has returned to the present. F.I.R. is an acronym for First Information Report that the Indian police prepares for each case to be investigated.

FIR is a situational comedy serial centered on a Haryanvi female police officer named Chandramukhi Chautala and her two subordinates, head constable Gopinath Gandothra and constable Billu. The show depicts their lives as they try to solve every case which comes to Imaan Chowki .

New cases come to the police station in every episode. An individual or a group come with a complaint or a problem. The problem generally has nothing to do with police. It may be a case of love, divorce, snoring, or bad cooking. The Chandramukhi Chautala and her constables solve the case successfully though the case has nothing to do with their official duties as police officers.
The show took a 20 year leap when Kavita Kaushik, who played the lead role, departed from the show and introduced Chitrashi Rawat as Chandramukhi’s daughter, Jwalamukhi Chautala. The changes were reverted on 8 July’ 2013 and the incidents occurring in the 20 year leap were converted into constable Gopi’s dream and the show then continued along with Chandramukhi Chautala’s return.
Kavita Kaushik (Hindi: कविता कौशिक Kavitā Kauśika; born 15 February 1981 is an Indian actress. She is best known for playing Chandramukhi Chautala on SAB TV sitcom F.I.R. for which she has won 48 awards thus far (January 2014). She has won the Indian Telly Award for Best Actor In A Comic Role (Female).[2] She is also considered one of the leading ladies of Indian Television.

The tall and gorgeous actress got her biggest break playing the role of a Haryanvi police inspector in SAB TV’s comic crime caper, F.I.R. Audiences loved Kaushik as the lead character Chandramukhi Chautala – a cop who possesses a somewhat manly nature and bossy attitude towards her colleagues, and always keeps her subordinates in check. Kaushik’s portrayal as the angry young supercop has lead to fame and many accolades. In addition to providing Kaushik with critical acclaim for her acting talent, this role has lead her to become one of the leading ladies of Indian Television.

After completing 886 episodes, Kaushik left the show to try something new. However, Chandramukhi Chautala has always been a fan favourite and the channel had no choice but to bring her back. As of 8 July 2013, Kaushik has returned as the fiery and lovable policewali. The show is so popular that is has even crossed the 1000 episode mark on 5 September 2013. And now from 21/01/2014 she will be promoted as Chief Inspector Chandramukhi Chautala..from SI to CI. Vipul Roy is an Indian television actor. He plays many TV shows. Today, he is being playing SAB TV show F.I.R. (TV series) as lead actor and role of “Bhola Pandit”.