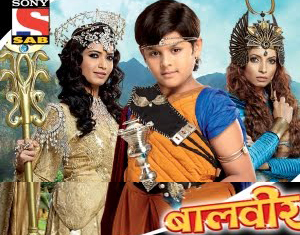 Baal Veer Watch Online The show is about Baal Veer, the ultimate hero for innocent, good and honest children. He is endowed with the capability of acquiring Pari Taraa, the source for all the power in the universe. The main obstacle in his way is Bhayankar Pari(Shama Sikander), who is the arch rival of the good fairies. This is to avenge the dream of her good form, Bhali Pari of becoming the queen, which was shattered due to Maa Pari(Rukhsar Rehman) enthroning Bahuroopi Pari(Shruti Seth) and making her the next Rani Pari. Bhayankar Pari tries to harm the good fairies, Baal Veer and the good and honest children of the Earth. She almost succeeds in doing so by making Rani Pari a statue of ice. Due to her wrongdoings, she is trapped and made a captive in the Sarvada Jail. In the process, Bawandar Pari(Deepshikha) more cruel, dishonest and shrewd fairy is released. She tries to harm Baal Veer and the earthlings by capturing the rain clouds but fails.

Baal Veer’s favourite friends are Manav(Rudra Soni) and Meher(Anushka Sen) belonging to the family of seven good and honest people, where Baal Veer lives undercover as Ballu. Manav and Meher are often troubled by Montu, the son of the school trustee Mr. Manibhai Lakhani. The two groups are often at loggerheads but everytime Baal Veer saves the day. Rani Pari is normal again and Bawandar Pari helps Bhayankar Pari to come out from Sarvada Jail.The fairies tries to destroy Bhayankar Pari but Bawandar Pari gets destroyed and Bhayankar Pari takes her wand to increase her power.

Bhayankar Pari tries many times, but all her attempts to harm Baalveer and the world’s good children are unsuccessful. She also has a silly follower, Tauba Tauba, who always speaks negatively. She got her own wand back later but still all her plan failed. Bhayankar pari shakes hand with Chhal Pari a another evil fairy who was captured for 150 years but still their powers are not enough to defeat Baal Veer.

Baal Veer, is a kids based super hero show. It talks about a wonderland, Pari lok, where all the fairies reside. There are numerous fairies in Pari lok and each pari has her own basic characteristic according to their name..He is a human who is taken to Pari lok by fairies.. Baalveer is blessed with the power of the 6 fairies and with those powers he helps Manav and Meher and other kids in fighting against their fears. Baal Veer comes as a saviour for Manav-Meher and fights against all

Baal Veer comes across many problems created by the Bad faires and also faces defeat but in the end he finds a great solution in every way making sure to keep safe all the good fairies in Parilok and all the humans on Earth.