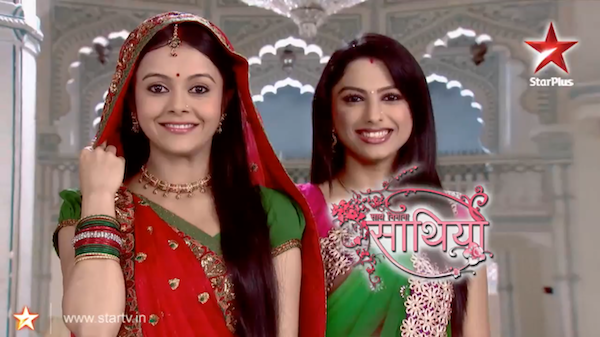 Saath Nibhaana Saathiya Watch Online is an Indian television drama series that launched on 3 May 2010. The series is broadcast worldwide on STAR Plus, with older episodes transmitted on STAR Utsav. The series is based on the lives of two female cousins after their respective marriages within the household of the Modi family. The serial, although set in Rajkot, is filmed in Mumbai. Episodes of Saath Nibhaana Saathiya have been recorded on location in Kutch (in 2012) and in Switzerland (in 2011). The series has also been dubbed into Telugu for broadcast on MAA TV, where it airs under the title Kodala Kodala Koduku Pellamaa.

Saath Nibhana Saathiya is the story of two cousins Gopi and Rashi, who are completely opposite from each other. Gopi is an orphan who leaves with her Mama-Mami and cousin Rashi. She is very innocent and is illiterate. On the other hand, Rashi is very wise and greedy like her mother Urmila Shah. The story starts with Kokila Modi’s search for a perect bride for her son Aham. She chooses Gopi as her daughter-in-law. This makes Rashi and Urmila jealous of Gopi. Aham leaves his girlfriend Anita for his mother without knowing that Gopi is illiterate.

Rashi starts liking Aham’s cousin Jigar, but his marriage gets fixed with his mother Hetal Modi’s friend’s daughter Sonal. Rashi and Urmila makes a plan for marrying Rashi with Jigar. They make Sonal and her family think that Jigar and Rashi have an affair. Finally, Aham-Gopi and Jigar-Rashi get married. Aham starts hating Gopi after knowing that she is illiterate and Jigar also notices change in Rashi’s behaviour after marriage. Rashi and Urmila make various plans for keeping Aham and Gopi away from each other. Rashi and Urmila doesn’t like Kokila as she always yells at Rashi on her mistakes and call her Kagadi. Gopi wins everybody’s heart in the family except Aham.
Kinjal loves Umang, the brother of Anita, but Umang cheats Kinjal to take revenge of her sister. Gopi and Aham win a dancing competition during Navratri. The family arranges Kinjal’s marriage with Elesh Mehta. Gopi promises Aham that she will leave Modi Bhavan after Kinjal’s wedding. Kinjal tells her family that she is pregnant. Urmila tells Elesh’s mother about Kinjal’s claimed pregnancy and the marriage is cancelled. The family gets angry at Kinjal when she tells them that she is not pregnant. Kinjal is married to Urmila’s nephew Dhaval.

Aham tells Kokila to send Gopi to Urmila’s home which makes the whole family sad and Urmila happy. Kokila’s mother Revathi arrives and asks for Aham’s wife. Aham brings Gopi back to Modi Bhavan. Nani have a box and she has to give to her favourite bahu. Rashi tells her mother that the box has jewellery. Savita, a neighbour challenges Modis for Cricket match and they win the match because of Gopi. On Holi, Gopi confess her love because she ate Urmila’s ladoo. This makes Aham very angry on her. Rashi wins the competition but the box has Lord Krishna’s idol. Nani tells Kokila to make Gopi and Aham come close.

Kinjal tells Kokila and family that Urmila wants to take revenge of Rashi from her and she and Dhaval go to stay at Modi Bhavan. Someone kidnaps Rashi and asks Gopi to bring money. Gopi goes to give money and meets accident and suffers from critical condition but saves. Aham for the first time realises his love for Gopi and they both come close to each other. Gopi asks Kokila to bring Rashi back. Urmi brings Dhaval and Kinjal back. Aham and Gopi help Jigar and Rashi to improve their relationship. This makes Kokila angry. Nobody in the family believe Rashi, which makes her restart doing evil things. Kinjal and Urmi bring lottery tickets. Kinjal win lottery but Urmi exchanges lottery ticket. After some time Kinjal get to know about lottery but all money goes waste. On Holi, Aham eats ladoo of Bhang and consummates his marriage with Gopi.