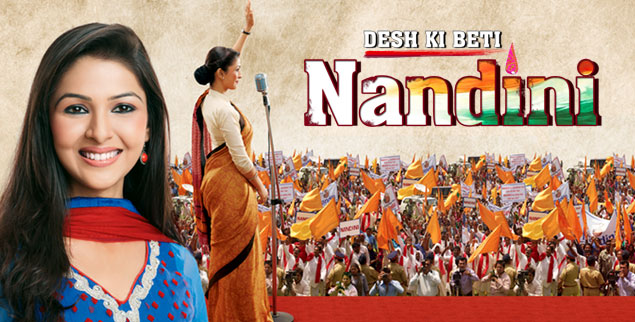 Desh Ki Beti Nandini Watch Online is an Indian political drama show, which airs on Sony TV, and it is produced by Rashmi Sharma Telefilms. It replaced the show Chhanchhan.

It is the story of a simple, young and cheerful girl-next-door called Nandini hailing from a middle class family in Chandni Chowk, Delhi. Her father Ashok Pandey, is a retired government officer and mother Aanchal Pandey, a loving homemaker. She has an elder brother, Siddhart who is struggling to find a stable job and a younger college going sister, Ritu, who loves the world of fashion. While retired Ashok is still waiting to receive his pension money and Siddhath is looking for a stable job, Nandini is the sole bread winner of the family, who is working as a wedding planner. She is not only a responsible family member but also a responsible citizen, who believes in addressing daily life social problems instead of just complaining about them. Empathy, kindness, hard work and a zest to help others are the virtues she has been gifted with since childhood. She gets married to Prince Rajveer Raghuvanshi from royal family which is also a infleunt political family.Will she jump into politics and be sucessfull.For a girl, who has always fought for the right things and faced the challenges it brings with her optimism, will she be able to run a nation the way she runs her home? Will she truly become the epitome of women empowerment?

Keerti Nagpure (born 23 January 1992) is an Indian television actress. She started her career with Star Pravah’s Olakh. She was discovered in Star Pravah Talent Hunt – ‘Star Hunt’, following which she was offered the lead role in Olakh. She essayed the role of Vibhavari Talvekar in the show. Keerti is known mainly for her popular role as Siddhi in Balaji Telefilms’ Parichay that was aired on Colors TV, where she played the female protagonist. She has also featured in a Marathi film Zaalay Dimag Kharab.keertI

Born and brought up in a Marathi family in Pune, Keerti is a graduate in Interior Designing. In January 2013, Kirti met with an accident and had minor injuries. But she recovered soon to get back to shooting.
Keerti Nagpure became a household name with her character Siddhi Chopra in Parichay. Featuring opposite popular television and Bollywood actor Samir Soni, it was a dream come true for her. Making her debut in the Hindi television industry, Keerti was recognised as one of the top fresh faces for the year 2011. Enacting the role of a mother in Siddhi, she was also rated high as one of the top 10 young mothers on Indian TV by The Times of India.