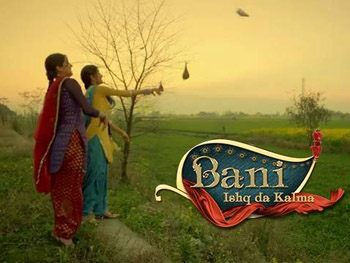 Bani – Ishq Da Kalma is an Indian television drama series, which premiered on March 18, 2013 on Colors. The series was originally titled Gurbani, which means the composition of the Sikh Gurus. The title of the series was changed after several concerns reported by Sikh organizations, including Shiromani Gurdwara Parbandhak Committee.

Desho declares her intention of getting an NRI bridegroom for her daughter Bani. Soham, who lives in Bani’s village, is smitten with her, but he is rejected by Desho since he is not an NRI. Amreek and Parmeet are NRI bachelors. Rajji’s marriage is arranged with Amreek and Bani’s with Parmeet. On the day of the double wedding, there is a great deal of confusion. First, it seems that Parmeet, who works in Canada, will not turn up for the wedding.

So Desho begs Soham to marry Bani and he joyfully agrees. But Parmeet does turn up at the last moment. Then, Amreek leaves in a huff because of a misunderstanding between him and Rajji. Now, because of a communication gap, the brides’ relatives get the impression that Soham has agreed to marry Rajji. Thus, Bani gets married to Parmeet, as planned, while Soham unknowingly marries Rajji instead of his true love.

Bani accompanies Parmeet to her in-laws’ home. Parmeet leaves alone for Canada the next morning, promising to return soon. In the meantime, Sohum and his family members realize that the bride they have brought home is Rajji and not Bani. They are very upset, but Sohum’s brother Angad suggest that they should give Rajji a chance. At first, Parmeet is quite regular in making phone calls to Bani. Then, it is revealed that Parmeet had only married Bani so that he could legally claim some ancestral property and sell it in order to make money. After getting what he wants, he stops calling Bani.

Eventually, Bani realizes that her husband has abandoned her, but she is determined to get her rights as a wife. She decides to search for him and bring him back. Soham offers to accompany her as an escort. But Rajji, who has been trying hard to make her marriage work, begs Bani not to take Sohum along.

So, Bani refuses to let Sohum accompany her and sets out alone for Delhi, from where she plans to go to Canada. In Delhi, she falls into the trap of some criminals who want to use her in the flesh trade. But, luckily, she is rescued in time by a social worker, a lady named Anuradha, whose home becomes a refuge for Bani. Anuradha’s daughter is about to get married to an NRI named Meet. On the wedding day, Bani discovers that Meet is actually her husband Parmeet, who plans to marry Anuradha’s daughter for money. Parmeet flees from the wedding when his truth is exposed.